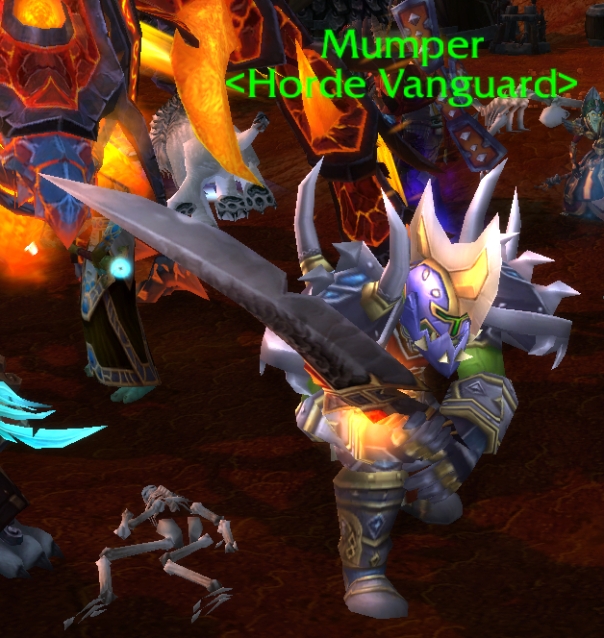 This horde NPC (looks like an orc to me) at the Dark Portal in Blasted Lands (Draenor) is named after Cory “Mumper” Stockton, lead content designer for Cataclysm and Mists of Pandaria.  He was heavily involved with the pet battle system and can be found on Twitter @mumper.

Shademaster Kiryn is one of the NPCs you have to beat in the Celestial Tournament.  Her pets are named after characters in George R.R. Martin’s Song of Ice and Fire series (Game of Thrones).

Nairn is the humanoid yeti and is named for Kristian Nairn who plays Hodor in the series.  A resemblance do you think?

Stormoen the Fluxfire Feline is named after the actor Jake Stormoen, a friend of Kristian Nairn.  Apparently they both visited Blizzard and they both play WoW!

Summer the Wolf (beast) is the name of Bran Stark’s Dire wolf in the series.

This staff, Giorgio’s Caduceus of Pure Moods, was on my wishlist for the longest time – it goes so well with heroic Stormrider’s Mantle (or heroic Passive Resistor Spaulders).   In fact all three versions of the staff are gorgeous, but it was the raid finder version that really matched and once you pass that tier, you can’t get it again.  I got it in the last weeks that LFR was available to me, boy was I happy!  I hadn’t really thought about the name but I found out recently that it is a tribute to a number of people.

Heroic, normal and LFR verions of the staff (from top to bottom).

According to WoWHead, Zarhym (a big Puscifer fan) posted this in Reddit:

So why am I telling you about this?

I first met Josh at a Puscifer show in Jerome, AZ this past Summer. This happened after I saw a picture posted by Puscifer band mate Carina Round of Josh beating Diablo III on Inferno — while on tour! To say I’m a fan of the band is an understatement, so I had to pick pieces of skull out of my keyboard for days after finding out he’s a Blizzard gamer and is well aware of my work as a CM. When he found out I was going to the AZ show he invited me backstage to chat and we fast became friends. I got him down for a Blizzard tour not long after the concert. Love was requited.

And I’ve been talking to him about music and games ever since! This man is incredibly talented, and his love for World of Warcraft and its community brings joy to my heart. When he’s not touring or recording, I see him on my Battle.net friends list, oftentimes pushing through Heroic raid progression. The dude has been doing remarkable work in the music industry for over a decade now, so to see him being recognized, and utilized, by the likes of Maynard James Keenan, and now Trent Reznor, is truly amazing.

With the blessing of some of World of Warcraft’s designers, I was able to get an item added to patch 5.2 that honors both his and his girlfiend’s WoW characters, while also paying homage to Maynard’s wine. When I first linked him to that he seriously freaked out. Seriously. In a good way!

I just felt compelled to share this all with the community. I want him to know that we’re rooting for him, and that he’s a prime example of so many people in our community who both work and play hard. 🙂

So this is Josh Eustis and Zarhym at Blizz HQ

And here is the logo from Maynard’s winery, Caduceus cellars – which I think is the inspiration for the graphic of the staff!

Isiset is one of the four constructs that protect the reorigination device hidden inside the Halls of Origination. She is the mistress of magic.  She is named after the Egyptian goddess, Isis, who was worshipped as the ideal mother and wife as well as the patroness of nature and magic (as pictured in her title).  She is pictured here with her son Horus, the god of vengeance, sky, protection and war.

Setesh is one of the four constructs that protect the reorigination device hidden inside the Halls of Origination. He is the lord of destruction.  Setesh is a clear reference to the Egyptian god, Set. Set or Seth (also spelled Setesh, Sutekh, Setekh, or Suty) is the god of the desert, storms, disorder, violence and foreigners in ancient Egyptian religion. In art, Set is mostly depicted as a fabulous creature, referred to by Egyptologists as the Set animal or Typhonic beast. The animal has a curved snout, long, rectangular ears, a forked tail, and canine body; sometimes, Set is depicted as a human with only the head of the Set animal.

Ammunae is one of the four constructs that protect the reorigination device hidden inside the Halls of Origination. He is the lord of life.  He is a reference to the Egyptian god, Amun, who has been described as a primeval deity and a symbol of creative force (which is represented in Ammunae’s title, Construct of Life).

One of my guildies looted this today whilst in Siege of Orgrimmar – it’s listed as personal loot so I have no idea what the drop rate is:

So who is Daelo?  Daelo is the nickname of Scott Mercer, who was World of Warcraft’s Lead Encounter Designer since Wrath of the Lich King, and into Cataclysm.  He’s still with Blizzard at this point in time, and contributed a lot to Mists of Pandaria, but is doing other things within the company now.  I wonder what his final words were… wish there was some flavour text on this item!

This NPC is found in Vashj’ir and was the captain of the “Verne”, the submarine you take from The Stygian bounty.  He gives out a lot of quests!  He’s named for the author Jules Verne, who wrote the book “20,000 leagues under the sea” – a story about Captain Nemo and his submarine, the Nautilus.

NPC – The Walrus and the Carpenter 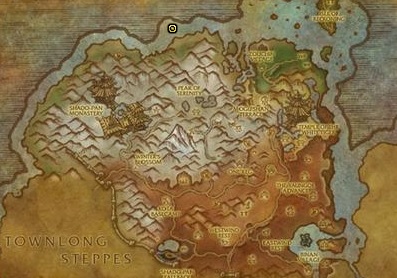 On an island just off the north coast of Kun Lai is a little island with a house on it and a Tuskarr and  Hozen on it, who are a clear reference to Lewis Carroll’s poem “The Walrus and the Carpenter” from Alice in Wonderland Through the Looking Glass. 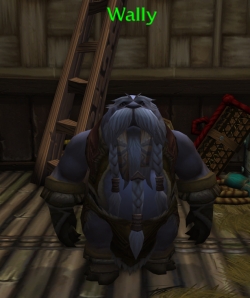 And when you talk to Wally, he even says parts of the poem to you!

THE WALRUS AND THE CARPENTER – LEWIS CARROLL

The sun was shining on the sea,
Shining with all his might:
He did his very best to make
The billows smooth and bright–
And this was odd, because it was
The middle of the night.

The moon was shining sulkily,
Because she thought the sun
Had got no business to be there
After the day was done–
“It’s very rude of him,” she said,
“To come and spoil the fun!”

The sea was wet as wet could be,
The sands were dry as dry.
You could not see a cloud, because
No cloud was in the sky:
No birds were flying overhead–
There were no birds to fly.

The Walrus and the Carpenter
Were walking close at hand;
They wept like anything to see
Such quantities of sand:
“If this were only cleared away,”
They said, “it would be grand!”

“If seven maids with seven mops
Swept it for half a year.
Do you suppose,” the Walrus said,
“That they could get it clear?”
“I doubt it,” said the Carpenter,
And shed a bitter tear.

“O Oysters, come and walk with us!”
The Walrus did beseech.
“A pleasant walk, a pleasant talk,
Along the briny beach:
We cannot do with more than four,
To give a hand to each.”

But four young Oysters hurried up,
All eager for the treat:
Their coats were brushed, their faces washed,
Their shoes were clean and neat–
And this was odd, because, you know,
They hadn’t any feet.

Four other Oysters followed them,
And yet another four;
And thick and fast they came at last,
And more, and more, and more–
All hopping through the frothy waves,
And scrambling to the shore.

The Walrus and the Carpenter
Walked on a mile or so,
And then they rested on a rock
Conveniently low:
And all the little Oysters stood
And waited in a row.

“The time has come,” the Walrus said,
“To talk of many things:
Of shoes–and ships–and sealing-wax–
Of cabbages–and kings–
And why the sea is boiling hot–
And whether pigs have wings.”

“But wait a bit,” the Oysters cried,
“Before we have our chat;
For some of us are out of breath,
And all of us are fat!”
“No hurry!” said the Carpenter.
They thanked him much for that.

“A loaf of bread,” the Walrus said,
“Is what we chiefly need:
Pepper and vinegar besides
Are very good indeed–
Now if you’re ready, Oysters dear,
We can begin to feed.”

“But not on us!” the Oysters cried,
Turning a little blue.
“After such kindness, that would be
A dismal thing to do!”
“The night is fine,” the Walrus said.
“Do you admire the view?

“It was so kind of you to come!
And you are very nice!”
The Carpenter said nothing but
“Cut us another slice:
I wish you were not quite so deaf–
I’ve had to ask you twice!”

“It seems a shame,” the Walrus said,
“To play them such a trick,
After we’ve brought them out so far,
And made them trot so quick!”
The Carpenter said nothing but
“The butter’s spread too thick!”

“I weep for you,” the Walrus said:
“I deeply sympathize.”
With sobs and tears he sorted out
Those of the largest size,
Holding his pocket-handkerchief
Before his streaming eyes.

“O Oysters,” said the Carpenter,
“You’ve had a pleasant run!
Shall we be trotting home again?’
But answer came there none–
And this was scarcely odd, because
They’d eaten every one.

Tsavo’ka is a rare that is found in a cave on the Timeless isle.  This beautiful tameable tiger is also a reference to a pair of male lions in Kenya, who were named the Tsavo man-eaters, because they terrorised and killed a number of construction workers who were working on the Kenya-Uganda railway (building across the Tsavo river)  in 1898.  John Henry Patterson led an expedition to kill these lions and wrote the book “The Man-Eaters of Tsavo” in 1908 which was turned into a movie starring Val Kilmer in 1996 “The Ghost and the Darkness”.