You wouldn’t see this toon unless you were levelling your Panda on the Wandering Isle (starter zone) and I admit I missed it the first time because I was so eager to get OFF that turtle’s back and join a faction.

This toon is a reference to Michael Bay, the movie director and producer, who is well known for his liberal use of explosions in his movies, and it isn’t surprising that this NPC has a quest for you to collect explosives.  Some of the movies to Michael Bay’s credit include:the Transformers movies, Armageddon, Pearl Harbour. 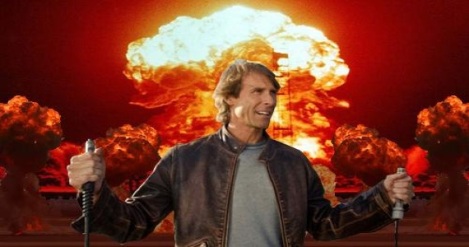 Tsavo’ka is a rare that is found in a cave on the Timeless isle.  This beautiful tameable tiger is also a reference to a pair of male lions in Kenya, who were named the Tsavo man-eaters, because they terrorised and killed a number of construction workers who were working on the Kenya-Uganda railway (building across the Tsavo river)  in 1898.  John Henry Patterson led an expedition to kill these lions and wrote the book “The Man-Eaters of Tsavo” in 1908 which was turned into a movie starring Val Kilmer in 1996 “The Ghost and the Darkness”. 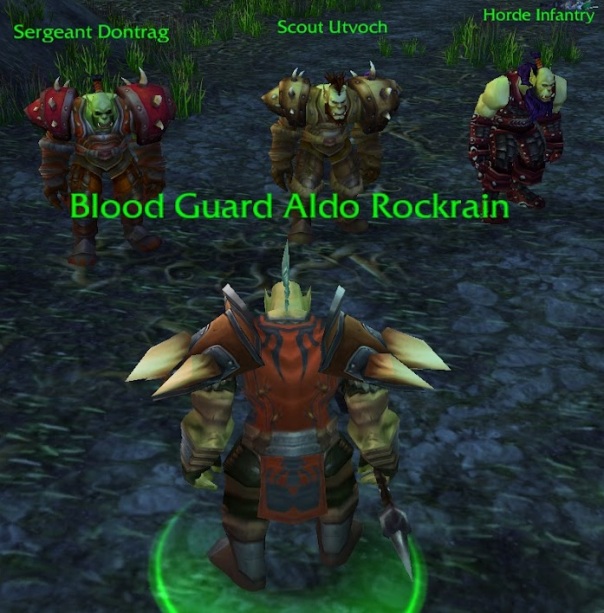 It took me a while to figure out this one… it sounded so familiar when I was doing it.  But a horde quest in Stonetalon Mountains, We’re here to do One thing , Maybe Two… had Aldo Rockrain giving the quests.  Aldo Rockrain is a reference to Lieutenant Aldo Raine in the movie, Inglorious Basterds, starring Brad Pitt.  Dontrag and Utvoch (pictured above as well) are a reference to Donowitz and Utivich in the movie as well.  Even their quotes are related to the movie! 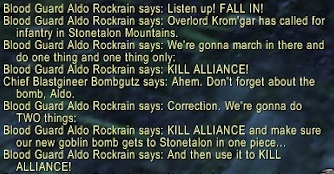 In the movie, Lt Raine says:

“And once we’re in enemy territory, as a bushwhackin’ guerrilla army, we’re gonna be doin’ one thing and one thing only… killin’ Nazis.”

Bambi, a famous Disney cartoon, is about a fawn who grows up to be the King of the Forest, and his adventures as a fawn and as a grown stag.

In Grizzly Hills you can find Bambina (Bambi) with his friends Thudder (reference to Thumper, Bambi’s rabbit friend) and Flora (reference to Flower, Bambi’s skunk friend), walking with Mother of Bambina.

This cute easter egg: A hunter comes out and shoots Mother of Bambina and Bambina becomes red and angry and chases down the hunter!

This group of creatures is found in the Circle of Wills in the Sewers of Dalaran.  They are a clear reference to Teenage Mutant Ninja Turtles.  4 turtles who were disposed of in the sewers, mutated by radioactive waste, and trained by a rat who had learned martial arts from his former master, who was also exposed to radioactive waste, turned the animal into humanoids.  The turtles were named for renaissance artists – Leonardo, Michelangelo, Donatello and Raphael, and the rat was called Splinter.  A popular cartoon followed the comic and there is also a movie as well.

John J Keeshan and a bunch of the quests in Redridge are a reference to John J Rambo (played by Sylvester Stallone) and Rambo: First Blood.  Colonel Troteman (throwback to Colonel Trautman in Rambo) is also here in Redridge.  As a side note he gets a promotion in Mists of Pandaria, and Marshal Troteman can be found in Krasarang Wilds giving out quests for Alliance as part of Operation: Shieldwall.

Keeshan even has some quotes in game from the movie:

And at the end, as a quest reward, you get Keeshan’s Bandana.  So you can be all Rambo-style!

This item is a reference from the movie “Big Trouble in Little China”, starring Kurt Russell and Kim Cattrall.  Even the flavour text is a quote from the movie!  You can get your own Six Demon Bag from Nefarian in Blackwing Lair for lots of blasting fun.

This image comes courtesy of Luxy who snapped him outside the Black market Auction House!  Extra info from Bubbles of Mischief and Wowhead. 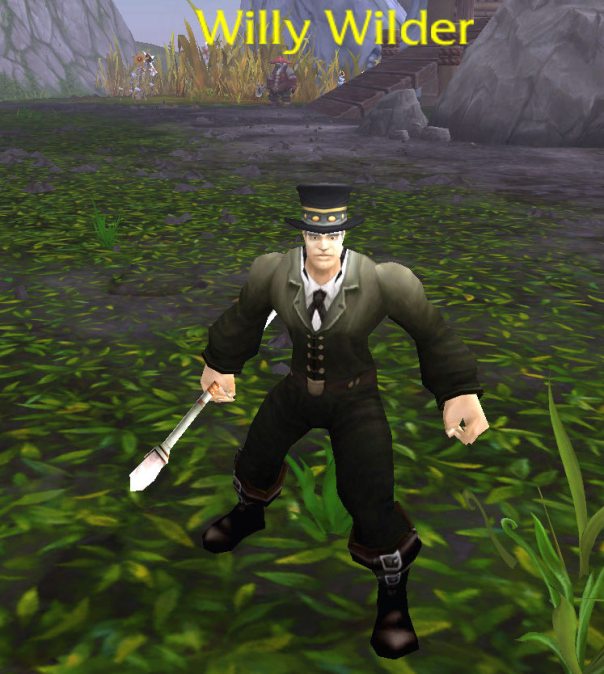 Though I havent’ seen him myself, Willy Wilder is a play on Willy Wonka (played by Gene Wilder in the original movie of Charlie and the Chocolate Factory).  He spawns in The Veiled stair and bids on Blood Soaked Invitations.  He is an angry fellow – he attacks you with Stuffed and Violets and Blueberries – very Willy Wonka type attacks!  If you kill him he is really does have a blood soaked invitation 🙂

With patch 5.2, 2 new islands appeared off Pandaria.  The Isle of Giants is located North of Kun-Lai and is inhabited by lots of elite dinosaurs!  It’s Jurassic Park!

Now this is hilarious.  Does anyone remember the scene from Jurassic Park II: The Lost World when they took the T-Rex on a boat to the city?  Does this not remind you of that scene?

And of course there are a whole heap of NPCs on the island named after characters in the movies, both Horde and Alliance.

Named after Dennis Nedry in Jurassic Park, the fat computer tech guy who was stealing the embryos and got killed by dilophosaurii whilst trying to get off the island

Named after Dr Ellie Sattler, the paleobotanist in Jurassic park. She says:
“At least there are no electrified fences. Or trolls.”
“Be careful, Agrant!”
“How could we know anything about an extinct ecosystem? Even the plants are poisonous!”
“I told you that you weren’t machine compatible!”
“We can make it if we run!”
“You only brought enough food for seven days! Seven! That’s just great.” 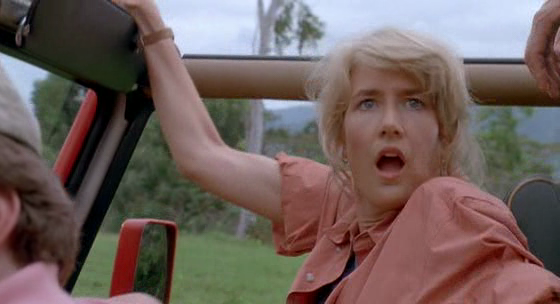 Though the name is a bit obscure, this one is named after John Hammond, played by Richard Attenborough. It even looks a bit like him with the beard and the small stature!  He has cool quotes when you talk to him from the movie:
“Agrant? Nellie? Isn’t it a bit dangerous to be outside of the zeppelin?”
“For some odd reason, I love to stare at this cane. Hmmm…”
“How could the expedition be a failure? I spared no expense!”
“What we need is some sort of protein-based population control. Perhaps we should have thought of that before coming here.”
“When we have control of the expedition again, everything will be fine…” 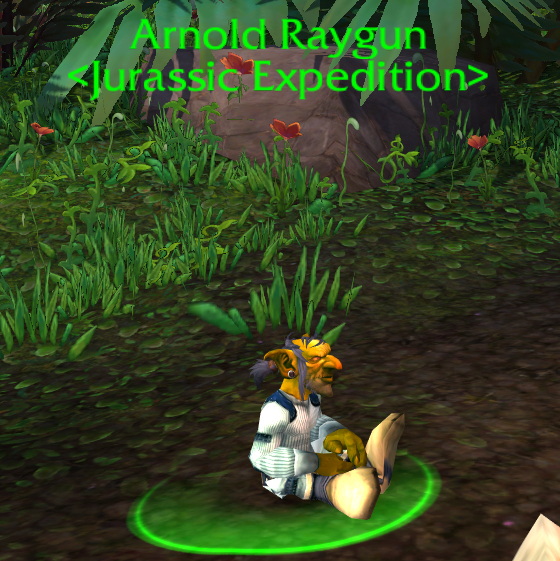 Named after Ray Arnold (played by Samuel L Jackson) the Chief Engineer of Jurassic Park in the original movie.

Named for Ian Malcolm, played by Jeff Goldbloom in the Jurassic park movies, he apparently even says some awesome movie related quotes:
“It’s, ah, the cycle of life, mm. The light creates troll, troll creates dinosaur, dinosaur eats human, trolls inherit Azeroth.”
“Do you think they’ll have this on the, ah, tour? Hm?”
“Anyone, ah, hear that? It’s ah, it’s ah, an impact tremor.”
“Am I, mm, talking to myself? I am? See there, I’m right again.”
“Remind me to thank Hamlock for a lovely weekend.”

Katrina Turner is named for Tina Turner who plays Aunty Entity in the movie Mad Max: Beyond Thunderdome.  She can be found in Gadgetzan, Tanaris, standing next to the cage named Thunderdrome.  Tina Turner also sings the song “We Don’t Need Another Hero” which is the theme song for the movie.  A good likeness!

And here is a picture of Thunderdrome in Gadgetzan.

And Dr Dealwell (reference to Dr Dealgood in the movie)